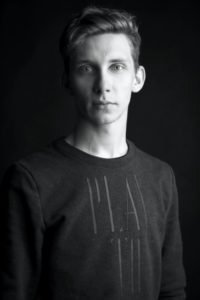 IRISH Artist, Eamonn B. Shanahan is a native of Thurles, Co. Tipperary. After four years of study at the Crawford College of Art & Design, Cork, Eamonn moved to London to pursue Creative Producing at the Royal Central School of Speech and Drama in 2015.

Eamonn passionately advocates creativity through his work as a director, designer, visual artist and creative educator.

Among other galleries, Eamonn has exhibited within a group and as a solo artist at the Crawford Art College, Alliance Francaise, Cork Film Centre, The Source Arts Centre and Lismore Castle. Eamonn is the founder of the Nua Collective and is a member of the Backwater Artists Network. As a practicing and commercial artist, Eamonn continues to use photography, film, painting and multimedia/graphic design.

In November 2020, Eamonn founded Nua Collective, a platform for artists currently showcasing its’ premiere season of professional visual artists from around the world.

Eamonn B. Shanahan is visual artist, photographer and theatre maker from Ireland. His strong work ethic is motivated by his passion for the arts and its’ further continuance and development endorsing the values of creativity for individuals, enterprises and communities. Motivating and curating arts projects, supporting and developing collaborating artists and participating in the evolution of cultural landscapes are the very premise for his artistic drive and ambition.

He graduated from the Crawford College of Art and Design, Cork in June 2014 with a Bachelor of Arts honours degree in Fine Art. Primarily, his practice focused on lens based media experimenting with Screen Dance and perceived reality. While in Cork, Eamonn began to establish himself as an artistic director and arts producer. He produced two major exhibitions including: “Are We There Yet?” in 2013, a multidisciplinary arts exhibition that featured 64 artists and hosted a programme of 6 performances throughout the event; following this he co-chaired his BA degree show exhibition “Na hOibreacha (The Works)” in June 2014.

Eamonn continued his education in 2014 at the Royal Central School of Speech and Drama in London where he completed his Master of Arts in Creative Producing and Theatre Studies. This intensive programme delved into the depths of arts management and creative entrepreneurship while also engaging with advanced study in performance research, archiving and understanding a deeper knowledge of the current cultural landscape. This MA led Eamonn to the English National Opera where he worked as assistant producer and company manager with the ENO Baylis department, working on their Opera Works programme.

Eamonn’s interest in theatre ignited as a member of Phoenix Productions when he started with the company in 2007. Eamonn performed in many of their productions until he became producer/production manager and marketing designer for their subsequent productions most recently ‘Beauty and the Beast Jr.’ (2015) ‘Cats’ (2017), ‘Into the Woods’ (2018) and ‘Peter Pan’ (2019). While in university, Eamonn continued his work in theatre with CIT Musical Society as artistic director and co-producer on three productions: ‘ Tick, Tick… Boom’ (2011); ‘ A New Brain’ (2011 & 2012); and ‘Into the Woods’ (2013). Eamonn began working with The Irish College of Music Theatre from their establishment in 2014 as marketing designer and photographer. He consequently worked on their productions of ‘Cabaret’ (2015) and ‘Putting it Together’ (2016). While assistant producer and company manager at the English National Opera, Eamonn worked on their Opera Works production of ‘Landscapes’ (2015). Eamonn directed and co-produced The Source Arts Centre’s pantomime ‘Aladdin’ (2015). He was director’s assistant on ‘ The Chastitute’ at the Gaiety Theatre and administrator to City Theatre Dublin’s ‘ The Matchmaker’ and ‘ The Successful TD’. Eamonn was most recently director/ producer on the World Premiere of Billie Traynor’s play ‘Beryl & Eejit’ (2017) at Theatre Upstairs, Dublin, produced the World Premiere of ‘Close’ at the Landor Space, Clapham, London (2018) and director/designer of the CIT Musical Society Irish Premiere of ‘Bad Girls’ (2018).

Eamonn’s debut short film release ‘ Workspace’ has toured galleries and art-house cinemas around Ireland including Lismore Castle Arts, Waterford; Alliance Francaise, Cork; The Source Arts Centre, Thurles and The Gate Cinema, Cork. Over the past number of years he as developed a collection of oil, acrylic and pencil artworks of which he will exhibit for the first time in November 2018 at The Source Arts Centre, Thurles. Click here to view the collection online.

In 2015 Eamonn established his production company Poppin Productions with the primary intention of developing original Irish work. In August 2015, he produced and directed a contemporary dance workshop based on an Irish Concept Album entitled ‘Duodeca’ collaborating with producer Cian MacSuibhne, singer/songwriter Briony O’ Toole and choreographer Aileen Coffey. This production enjoyed its’ first workshop in August 2015 at Lilian Baylis House and Royal Central School of Speech and Drama. Eamonn is passionate about encouraging new audiences and engaging as many people as possible to the arts. As part of this ethos he has created and delivered three courses that include: ‘Let’s Create’, a workshop for children on creating stories through different art forms. ‘Storymaking with Film’, an intensive course that looks at the principals of the practical and artistic elements of the filmmaking process. ‘Don’t Think, Play’, a course designed for educators that looks at applying creative learning to literacy. Eamonn is currently filming his first documentary web-series ‘The Artist’s Journey’ releasing online in 2019 featuring artists, theatre practitioners and creative thinkers.

In November 2020, Eamonn established Nua Collective, a new visual artist collective. A concept formed from necessity, Nua Collective launched online on November 20th 2020. Featuring 50 Irish artists in it’s first season, Eamonn created the initiative to create a supportive environment for visual artists to showcase their work in a way that would present their artworks while exposing their profiles with accessibility. Concurrent with its release, The Nua Journal was established to encourage artists to share their views and start a new conversation through the written word, webisodes and podcasts. The collective enjoyed two successful exhibitions – it’s inaugural exhibition ‘The Nua Collection’ (2020) and ‘Equinox’  (2021).

Eamonn is currently the creative director of Channel Islands Pride, Jersey (2021) and is working as a designer for Galway County Council’s Ceol an tSamhraidh (Summer of Music) (2021).

The work focuses on the emotive entity that can be examined in each painting. Each painting is created without direct preconception but with a compound memory of personal and cultural experiences.

Each artwork evokes an atmospheric space; structures, or lack thereof, that resonate an internal, emotional archetype.

Interacting shapes and towering plinths form the scale of the environment which is interrupted with brush strokes and plaster rendering that define the emotional pace giving a live theatricality that aims to resonate to the viewer’s life journey.